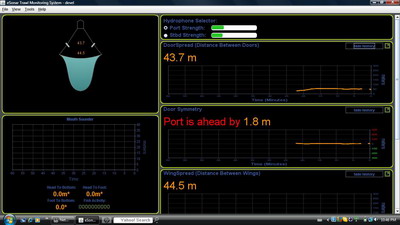 Wireless net monitoring system that enables a Skipper of a fishing vessel to monitor and manage the performance of the trawl. Thus ensuring the trawl is fishing at its best. The final results are shorter fishing trips, bigger catches and more profit. The eSonar System is designed to offer a top quality product at a very affordable price, with the sensor functionality being fully controlled by the user.

The receiver is the component of the system that can be installed on the bridge, engine room or any other convenient location on the vessel and receives information from the hydrophone. The Receiver is the interface between the user’s display and the hydrophone. This unit is Ethernet based, thereby allowing multiple displays to be connected.

Hydrophones are either mounted on the hull or towed behind the vessel and receive acoustic signals from the sensors. The Hull Mounted Hydrophone has the preamp built in and is available in:

Towed Hydrophone is the versatile way to receive signals from the eSonar sensors. The towed hydrophone is normally deployed and towed from the side of the vessel in ice-free conditions. This unit is very popular on boats that do not plan to be in dry dock soon, or those that want to use the system on more than one vessel.

This sensor is used to monitor the catch rate of the trawl. When the cod end of the net expands due to the weight of the fish, the catch sensor cord is pulled causing the reading on the display to increase as the catch rate increases.

By allowing the catch rate to be monitored, the catch sensor can reduce wasted time towing with a full net, or continuing to tow when the net has passed through the body of fish. Also, by having pitch and roll available on the catch sensor, the user can reduce the occurrences of net damage due to rolling of the cod-end as the net fills. The user can install as many sensors on the net as desired to monitor the catch progress.

These operate in the same way as door spread, but are mounted on the wings of the trawl.

The Headline Sensor ensures the proper trawl opening is maintained and the trawl is fishing at its optimal shape, thereby improving catch and minimizing time and fuel consumption.

This sensor can report up to 4 parameters from a certain position on the trawl. Knowing these parameters will help achieve more effective harvesting of a particular species. Since many species prefer a narrow range of temperatures, this information can be extremely beneficial.

This sensor is mounted on the trawl grid using a mounting bracket and monitors the grid angle, thus allowing the skipper to make the necessary adjustments to his trawl in order to correct and maintain the optimum fishing angle. The Grid Sensor can perform angle measurements from 0° to 180° with an accuracy of ±1°. The sensor is powered by a rechargeable Lithium Ion battery which has an operating life of 400+ hours between charges. Like the other sensors, the Grid sensor can also monitor depth. 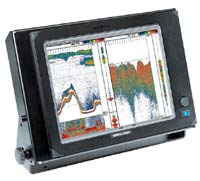 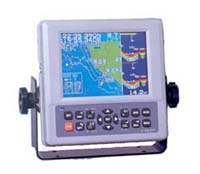 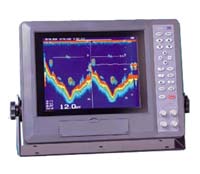