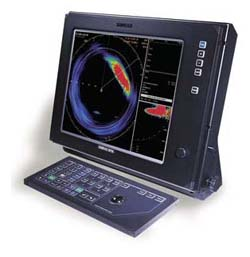 The Simrad SX90 sonar uses the ultimate of modern technology to detect targets under diffcult conditions.

The SX90 transmits a narrow vertical beam 360° around the vessel. The horizontal resolution is as narrow as 8.5° making sharp edges around the school during evaluation of different targets.

90° Vertical Tip
This a new feature on our sonars. We transmit a narrow forward-looking fan-shaped 180° wide beam. The fan beam can be tilted from +10° and down to -90°. This feature is specially designed for pelagic trawlers.

20 to 30 kHz
The SX90 sonar can operate on 11 different frequencies from 20 to 30 kHz. Lower frequency give less absorption and wider beam for long range in deep water, where range is limited by salinity. The higher frequencies provide narrower beams for use in shallow waters were range is limited by reverberation. You will also avoid interference from other sonars in the area.

Unlike other sonars, the SX90 both transmits and receives with narrow beams. Narrow beams are important in order to avoid false unwanted echoes from bottom and surface, this limits the detection range. At 30 kHz the transmit beam is only 6.7° wide. The receiver beam is only 7.4°.

Selectable beam width
With a narrow beam you continuously need to operate the tilt to keep the beam on the school. During the busy catching time, two wider vertical beams can automatically be selected. Target tracking is then made less dependent on the tilt angle.

Hyperbolic FM
This is another unique Simrad feature. The SX90 sonar transmits a long pulse with a continuously variable frequency. The receiver listens for an echo with the same frequency variations. Echoes with different frequency signatures are vastly reduced. The actual fsh echoes are enhanced, and fsh detection is made easier under diffcult conditions. Hyperbolic FM gives you 30 times better range resolution than common CW transmissions.

Picking the right school is important. Dynamic range means that you can tell the difference between a scattered school providing a weaker echo, and a dense school giving a stronger echo. Looking at the bottom echo, you can easily tell smooth from rough bottom. This is important when purse seining in shallow water, and during pelagic trawling where the footrope can touch the bottom.

Stabilized beams
The SX90 sonar is vertically stabilized evenly 360° around the ship, both for the horizontal as well as the vertical beams. The stabilized sonar beams enhance fsh detection in poor weather making searching still possible in situations you earlier gave up.

Dual mode
Conditions may sometimes change very quickly even within a few hours. With the dual mode feature you can set up two different sonar pictures on the monitor. One picture shows your normal settings, while the other is used to test new settings, flters, modes, pulse lengths, frequencies, tilt and other parameters in order to achieve better performance. If you fnd better setting, you save the new one settings as a new personal setting.

The SX90 sonar can store display presentations manually or automatically, and you can recall these later for further studies. All the pictures in this document are screen captures from actual situations on the fshing grounds from vessels already using the SX90 sonar.

Noise filter
The noise filter will suppress propeller noise, interference from other acoustic systems on your own vessel or on other vessels near by.