As piracy and terrorist attacks have increased over the years IMO has defined a set of mandatory requirements in the SOLAS Resolution XI-2/6 to improve security for ships.

The new SOLAS resolution 6 states that the Ship Security Alert System shall provide ships with two alarm buttons, which can be activated in case of a piracy or terrorist attack. The alarm is a covert signal, which will have no sound and no flashing lights so that it is in no way obvious to any intruders on board the ship.

1. All ships shall be provided with a ship security alert system, as follows: 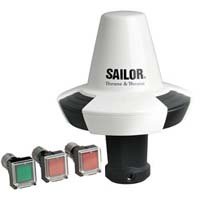 The Thrane & Thrane SAILOR 6120 mini-C SSAS builds on the successful legacy of the SAILOR TT-3000SSA System, which since its introduction in 2004 has proven its worth in real world incidents, time and time again.

Like its predecessor, the SAILOR 6120 mini-C SSAS is based around a, self-contained and sealed Inmarsat mini-C terminal, housing both antenna and transceiver. This design approach has proven to be rugged and reliable regardless of vessel type and with the terminal’s 50 channel GPS module and omni-directional antenna, satellite fix and position are ensured even under the most adverse conditions.

The SAILOR 6120 mini-C SSAS fully meets and exceeds the requirements listed in IMO MSC. 136(76) and MSC. 144(77) under SOLAS resolution XI-2/6. This stipulates that all vessels over 500 GT are required to be fitted with a Ship Security Alert System (SSAS) to be used under pirate attacks to notify the flag state administration. Alarms are silent, meaning that there is no audio or visual indication on the vessel that an alarm has been activated.

The multiple address functionality enables additional messages to be sent directly to, e.g. the vessel owner, operator or crew family, in addition to the required flag state and ship owner message in relation to the ISPS code. Re-configuration can be done remotely or by a Thrane & Thrane technician, and has been made simpler, requiring no crew interaction. New configurations may be required when changing flag, where the SSAS alert address stored in the terminal needs to be updated. The Thrane 6194 Terminal Control Unit (TCU), is the key connection point to the system and brings new functionality to ease operation. The TCU has a range of LEDs that allow operators to quickly determine Inmarsat, GPS and program status. They are all usefull features if the SAILOR 6120 mini-C SSAS is also used as Long Range Identification and Tracking (LRIT) carrier.

Upgrading from a SAILOR TT-3000SSA has been made easy as existing SSAS alert and test buttons can be simply connected to the TCU instead of the legacy interconnection box. The SAILOR 6120 mini-C SSAS comes complete with all cables and connectors, making it ready to go out of the box. The standard connection cable to the mini-C terminal is 30M long, but can be extended up 200M. 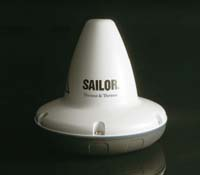 The SAILOR TT-3000SSA Ship Security Alert System (SSAS) rests on the renowned and very reliable Inmarsat-C technology from Thrane & Thrane, which for more than a decade has been an integral part of the Global Maritime Distress and Safety System (GMDSS).

The SAILOR TT-3000SSA can deliver SSAS alerts direct to competent authorities and other destinations, as specified by the ISPS code and shipping company. As an additional feature, the SAILOR TT-3000SSA is capable of reporting its GPS positions on regular intervals. The settings are fully end-user controlled from remote via satellite link and thus independent from crew interventions on board.

The SAILOR TT-3000SSA system is approved by Inmarsat and all major classification societies including: DNV, Lloyds Register, Bureau Veritas, Germanischer Lloyd (GL), ABS, US Coast Guard, CCS, Russian DMT and RMRS. In addition, the SAILOR TT-3000SSA has acceptance statements from relevant flag states throughout the World.