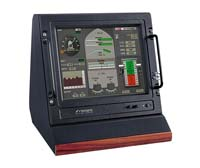 Navi-Conning is a soft- and hardware system, which is intended for the processing and recording of parameters supplied via different channels from external sources of information. This system will considerably simplify the work of the watch officers by permanently providing valid information on the operation of ship systems. In combination with other Transas products (Navi-Sailor ECDIS, Navi-Radar), Navi-Conning forms a highly efficient Integrated Navigational System, especially in demand under the strain of a limited budget and lack of free space.

Navi-Conning 3000 system is designed to process parameters supplied both, in ASCII code and in the binary form. It supports the following data exchange formats and their versions:

All the data processed by Navi-Conning can be output to an external device in NMEA format.

A standard Navi-Conning 3000 system provides 4 base screen views. Three of them (Sea, Mooring, and Narrow) are formed according to their functional purpose to display the following information in graphic and numeric form:

t is possible to order the development of parameter indicators not included in the set of indicators provided on the base screen views. The example of an alternative screen layout is shown in the picture.

Navi-Conning 3000 has a built-in Data Recording System (DRS) functionality for:

Use of the DRS Playback utility together with Navi-Sailor 3100 Playback allows all the information to be viewed on one screen.