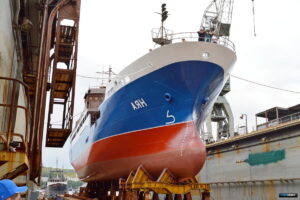 At the Vostochnaya Shipyard (Vladivostok), a flag was raised on a vessel for catching and transporting a live crab of the 03141 Ayan series. The second crab vessel, built at the Far Eastern shipyard for the Far Eastern Coast company, was solemnly handed over to the customer. The project is being implemented based on the results of crab auctions with investment obligations. This was reported by the joint press service of Rosrybolovstvo.
This is the third vessel that has already been built at Russian shipyards as part of the state program to upgrade the domestic crab fleet. Two – at the Vostochnaya Shipyard and one – at the Leningrad Shipbuilding plant “Pella”. A total of 41 crabstones will be built. All vessels must be built no later than 2025.
“Ayan” is a serial vessel of project 03141. It is intended for fishing crab and shrimp traps, as well as for storing the catch in chilled seawater with subsequent transportation of fresh product to the port. The lead vessel of the Okhotsk series of this project has been successfully working on the development of a valuable resource for six months.
The developer of the project is LLC “SK Viking”, the working design documentation is KB “Ship”. Length — 63.27 m; width — 10.6 m; displacement — 1586 tons; GD power — 1618 kW; speed — 14 knots; crew — 21 people; autonomy — 45 days.
JSC Vostochnaya Shipyard (formerly Vladivostok Shipbuilding Plant, SSZ No. 602) is one of the leading shipbuilding enterprises of Primorsky Krai and the Far East. It has been operating since 1952, in 1994 the company was corporatized and transformed into JSC Vostochnaya Shipyard. Specializes in the construction of warships, supply vessels and berths for the Pacific Fleet and the FSB of Russia. Since January 2020, it has been the only enterprise of the military-industrial complex in the Far East — a resident of the Free Port of Vladivostok, implementing an investment project based on an existing enterprise. The technical capabilities of JSC Vostochnaya Verf allow us to carry out a full cycle of work on the construction of ships and vessels up to 120 m long, up to 16 m wide, up to 25 m high and with a displacement of up to 3,500 tons.